What Is A Filling? 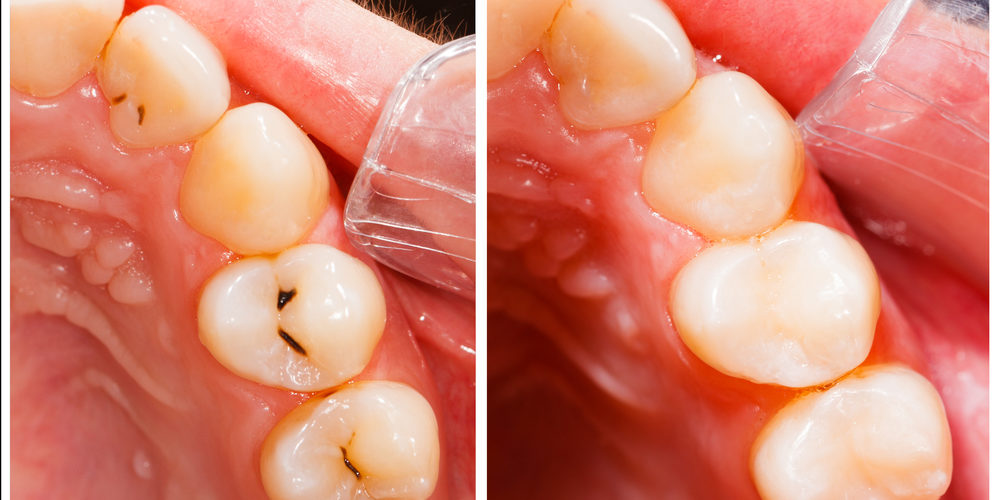 A: A filling is something that we would put in place where a small cavity would be. Basically, a dentist will need to go in there and clean out the bacteria where the tooth is basically compromised. Then they would come back in with a composite filling, or sometimes people will use metallic fillings and other things. Ultimately, we use composite so it’s white and matches the tooth’s natural color. What you’re doing is you’re sealing that off, hopefully from keeping additional bacteria and additional issues and that ultimately helps save the tooth.

Need That Cavity To Disappear? Fillings Can Help!

You might have had a friend that had a few cavities that were bothering them and then all of a sudden you notice one day those cavities are gone and they no longer complain about them. Was it magic, was it a dental implant? Actually, it may be neither!

When patients have a tooth that has a cavity but isn’t beyond saving, their dentist may opt for the procedure mentioned in the video—a filling.

You may have heard of fillings before and may have a pre-conceived notion about them. Yes, traditional fillings in the early days of dentistry were made from a mixture of metals such as tin or mercury—most of the fillings we use here are a composite resin material that matches the color of the tooth.

These advances in filling technology have resulted in a filling that more closely resembles a natural tooth in color and in texture and are virtually unnoticeable. Older fillings were admittedly an embarrassment to some due to their composition of metals that looked completely different than a natural tooth.

Now, while the cosmetics of fillings have advanced leaps and bounds it isn’t all just about the aesthetics of these fillings but also the functionality of the tooth they help retain. When metal fillings were the only option many foods could trigger sensitivity in the tooth and many patients were actually allergic to the materials used.

With the new composite resins that are hypoallergenic and more natural in appearance, those problems are a thing of the past. In fact, when you really think of how fillings have progressed, it’s quite fascinating.

The Woes Of Early Cosmetic Fillings

Even though they were technically “tooth colored,” they lacked the durability of traditional fillings made from metal and they honestly didn’t look much better. Since their durability was a weak point they also could not be implemented in areas of the tooth that had to be under a lot of pressure as they fillings would crack easily under such conditions. They also felt foreign in the patient’s mouth as the materials felt nothing like a tooth and were near impossible to polish like one.

The Miracle Of Composite Fillings

Several layers of the resin are laid down on the tooth, cured, and then the process is repeated until the cavity is full.  Then the excess is removed and the filling undergoes contouring to match your tooth’s shape and surface all being followed up with a polish to match perfectly.

Chances are, if you’re in your 20’s or older, you’ve likely had to be treated for at least one cavity before. In fact, Over 88% percent of patients from age 20-64 have had a cavity at some time in their life. So knowing that you are not in the minority if you have a cavity, you should feel confident in doing something about it—you don’t have to let it progress. You should take advantage of the wonderful benefits of cosmetic fillings from Comprehensive Dental Group of Houston.

Our Cosmetic Fillings Bond With Your Teeth

When you opt for the older, traditional metal fillings, the filling never actually bonds to your tooth and often people have to come back for a re-application because their metal filling has fallen out.

Think of it like patching a hole in a wall. You can just put some spackle in the hole and fill it with some filler and paint over it—but that’s not going to look right or last long. Eventually, it will breakdown and the “filler” you put in the wall will shift or fall out—and you have that ugly hole again. However, if you actually replace the hole with compound, blend in a new piece of drywall, and then re-seal it, you have permanently fixed that hole and the wall is—no pun intended, whole again.

The same concept can be used when talking about filling a cavity. In the old school fillings from the past, the dentist makes a putty-like substance from a powdered alloy and liquid mercury that is packed into the cavity. It cures fast and hardens, but it never actually adheres to the tooth, it’s literally held in by tension.

Our modern cosmetic fillings, however, are a completely different procedure and concept altogether. As mentioned, we use a resin material that is painted in layers into the cavity and the tooth and cured to harden. Once the cavity is filled, we refine it by gently grinding down the excess resin, clean it and then polish the filling to complete. The filling is now one with your tooth, it is not held in with tension, rather it is now part of the tooth.

We Save Most Of Your Healthy Tooth With Our Cosmetic Fillings

Because metal fillings have to be stuffed into the cavity, there is some actual drilling of the cavity required, which means you will lose some healthy tooth material too. The drilling needs to happen to make room for the putty and it does remove a significant amount of healthy tooth matter. For this reason alone, cosmetic fillings are the ideal solution for cavities both major and minor.

You read that right, metal fillings contain mercury. While the amount of mercury is in very low levels and has been declared safe for patients over the age of six—it’s still something that raises major concern for most patients. The reasoning is because while at such low levels mercury might be safe, it does not mean it can’t cause significant allergic reactions in quite a large sampling of patients—some which are quite serious in nature. Our cosmetic fillings do not contain any metal and are medically safe and hypoallergenic.

One of the biggest advantages of our cosmetic fillings is that they are practically invisible to the naked eye. Since the resin we use is matched to the color of your tooth and feels like your tooth’s enamel, you might forget you have a filling at all, let alone someone else notice you have one. You get a perfect smile again without that glaring metal shine in your mouth that most patients dread.

Cosmetic fillings from Comprehensive Dental Group Of Houston will give you back that bright smile you once had. Your confidence shouldn’t be hindered by a few cavities when we can correct that in just one single visit.

Contact us today for your free consultation and get your smile back in one day!